A Release, albeit a tiny one

It has been a long time, but I have finally made a new release of Knowfox. There a are still many ideas to be realised, but I started with a little feature and the removal of a long standing annoyance and the fixing of a bug.

Knowfox, my personal knowledge management system, now runs on Laravel 8. This is the latest version of Laravel and comes with some nice features like support for teams that we can soon utilize in Knowfox as well. 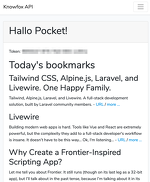 A simple webblog with Laravel and CRUD

Knowfox is based on Laravel, the PHP framework for artesans. Aside from being a system for personal knowledge management, Knowfox is also an opensource system that can be used as a toolbox for your own projects. In this article, I will explain how to use Laravel, some opensource components and the Knowfox CRUD package to setup a simple weblog.

Bookmarks must now be unique

A small change, granted, but one that has bugged me for some time now: The angst of collecting an URL twice and not realizing it.

Search is now local by default. This utilizes the hierarchical structure of concepts in Knowfox and generally seems to be what users expect.

Knowfox now runs on the latest version of the Laravel framework, Laravel 5.5 LTS.

Besides hierarchies, Knowfox also has tagging for concepts. This article gives an overview.

Knowfox is a personal knowledge management system that is open source and meant to be self-hosted.